We're open for business and delivering throughout the U.S. and Canada
Origin of St. Valentines Day 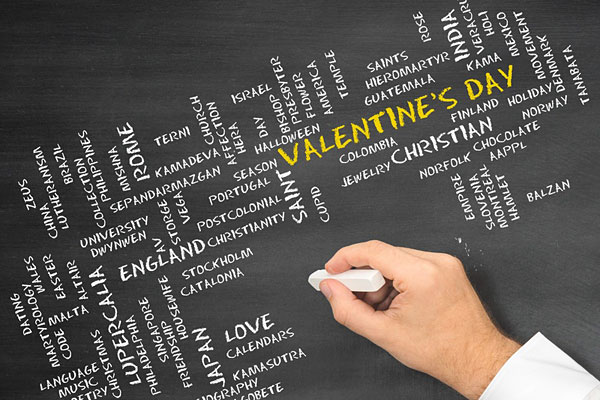 St. Valentine's Day is the result of the unlikely combination of a Pagan celebration and a Saint of the Catholic Church. In Pagan history, February 14th and 15th was the celebration of Lupercalia, a festival held honoring Juno, Queen of the Roman Gods and Goddesses. Juno was the Goddess of Women and Marriage. During the festival of Lupercalia a lottery was held where young men drew names of women out of a box. The name they drew was the name of their sweetheart for the entire year. The couple would exchange gifts and often they would fall in love.

Many legends are told of St. Valentine and the origin of Valentine's Day. One story is of how Valentine, a believer in love, went against the Roman emperor of the time, Claudius II by marrying couples secretly. Claudius II believed strongly that single men made better soldiers than married men; therefore he set out to build a strong military of single men. When Claudius II learned of the secret marriages St. Valentine was conducting, he jailed Valentine and later executed him on February 14th, now established as Valentines Day.

Another legend states that Valentine was an imprisoned man who fell in love with a forbidden woman, the jailors daughter. He wrote letters to his love proclaiming his love to her and he signed these letters with the popular phrase used today, "Your Valentine."

Today we do not use the tradition of the Lupercalia lottery; however that ancient tradition has some symbolic meaning. Choosing a random name out of a box symbolizes the idea that one cannot choose who they fall in love with. Cupid is a sneaky little God.

* Have used 1st in Flowers before, always a good experience very good product and problems dealt with quickly, will use them anytime I need to send flowers or gifts


* After exhaustive efforts to send flowers to my granddaughter for her first birthday in Canada from the USA, I found your web site. I tried 1800flowers, Teleflora, and FTD with either no luck in available arrangements to be delivered or exorbitant 'service fees' I was almost resigned to give up. I tried 'just one more' Thank goodness I did! Scarlett received her Bear Hug arrangement a few minutes ago. Her Mom (my daughter) says they are 'beautiful, smell fantastic and the bear is adorable.

Share this page with a mobile phone using your QR Code app!